Expectations of the garlic campaign

Tips for creating a bunch of garlic

Expectations of the garlic campaign

The sowings do not present plagues nor diseases, which causes a very good quality of the fruit

Good expectations for the next campaign ajera. This has been one of the conclusions drawn from the meeting of the National Table of the Garlic, held the past April 24 in Aceuchal (Badajoz), which involved producers from the regions of Castilla-La Mancha, Extremadura, Andalusia and Castilla y León.

The president of the Table and vice-president of Cooperativas Agro-alimentary Castilla-La Mancha, Julio Bacete, said that “there are good expectations for the next campaign, since at the market level is expected that there are hardly any stocks at the end of this campaign ; these will be very low, so we will not have the problem of surpluses. ”

It has also been highlighted that the surface will be similar to last year, or significantly higher, and that the situation of plantings is optimal, “the state of the crop is very good, there are no problems of pests or diseases and production is very healthy, which gives a very good quality, “clarifies Julio Bacete.

Decrease in production of purple garlic

“These situations are at the national level but also extrapolated to Castilla-La Mancha, where excellent quality is also expected and starting next season with a level of zero stock.”

However, a fact that has been highlighted in the meeting has been the drop, one year, of the production of purple garlic, “this type of garlic accounts for 40% of the total cultivated hectares nationally and will represent a third of the total expected production; it is the lowest data that has been produced to date “. 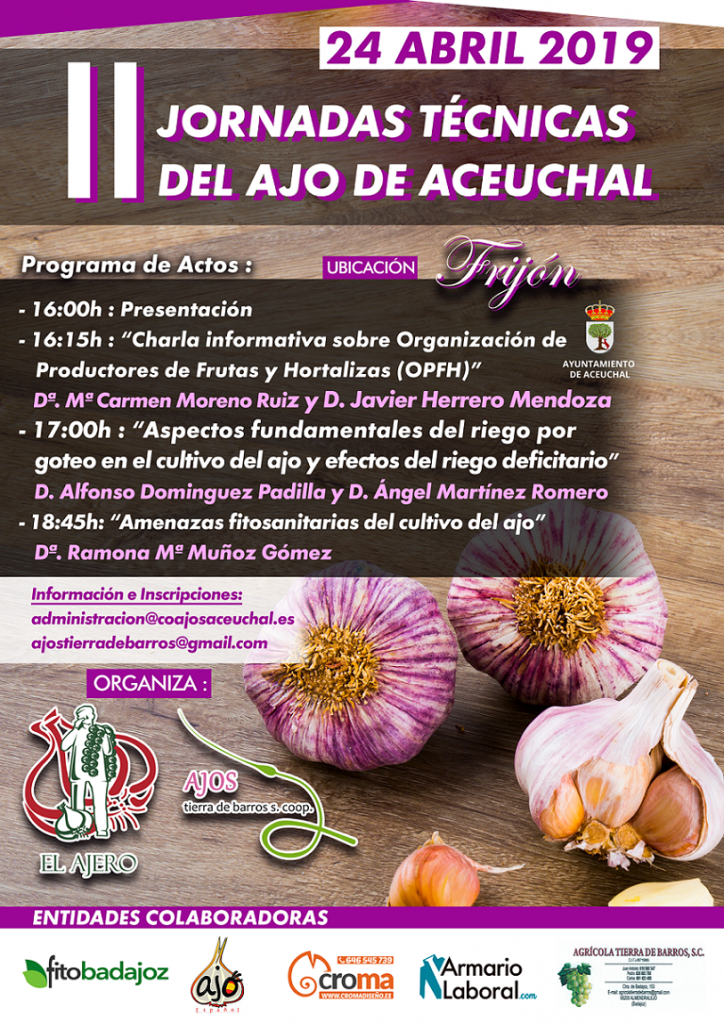 A decline in garlic production is expected in China

Another of the highlights of the meeting has been in analysis of garlic production in China. Specifically this year is expected a decline in production in China compared to the figures of previous years, because the Asian country will have less area sown, “this forecast of less production will cause less pressure in the next campaign worldwide.”

Study Efficient Use of Water

Regarding the Study on the Efficient Use of Water in the cultivation of garlic, which all the producing areas belonging to the National Garlic Table have committed themselves to carry out, it was recalled in the meeting this morning that it is expected to have all the information compiled with indicators of water use in garlic and the most significant ratios, such as the volume of water used or the labor generated by the volume of water used, “values that will allow demonstrating and reporting on the generation of value and labor so high that it provides the cultivation of garlic in our country. ”

It is expected that at the next meeting of the Bureau, which will take place in September, the results of this Study will be made public with all the data of the Autonomous Communities involved.

Technical Conference of the Garlic

The meeting of the National Garlic Table took place within the framework of the II Technical Conference of Garlic, held in Aceuchal and in whose organization the Board itself has participated.
An informative talk on “Organization of Producers of Fruits and Vegetables (OPFH)” was held in them, by Mari Carmen Moreno Ruiz and Javier Herrero Mendoza; the paper “Fundamental aspects of drip irrigation in the cultivation of garlic and the effects of deficit irrigation”, by Alfonso Domínguez Padilla and Ángel Martínez Romero; and finally “Phytosanitary threats of the cultivation of garlic”, by Ramona María Muñoz Gómez.