COAG has published the specific data to the IPOD of August 2019, this time the garlic heads the ranking of speculative price differences reaching 615%. The kg of garlic was paid to farmers at 0.74 euros and consumers paid 5.29 euros per kg in the market, which is 7’15 times the value of garlic at origin.

The Coordinator of Farmers and Livestock Organizations has just published the data related to the Price Index in Origin and Destination of Food (IPOD) last August, we registered the IPOD is an indicator that provides data on the price that is He pays for some basic foods in the field, and the price that consumers pay for them in the market, in this way we can know how much the food costs in their trajectory from the field to the table.

The general IPOD has been established at 4’04%, being 10 tenths lower than in the month of July, this seems a good fact that shows that price containment is maintained despite the holiday period but, still, some Products have exceeded the 500% barrier. The highlight of this month’s indicator is the difference in the price of garlic, which reaches 615%, somewhat lower than in the month of July that reached 639%, but maintained above 600% as it seems usual.

As we have said on other occasions, garlic is one of the products that usually exceed the 500% barrier and therefore, are often highlighted in the IPOD. In origin, the kg of garlic was quoted at 0.74 euros, three cents more than in the month of July, and in the market, consumers paid an average of 5.29 euros / kg, which represents an increase of 4 cents compared to the month of July. According to the data, in the market we have paid 7’15 times the value of garlic in the field, more or less the same difference established almost every month of the year.

Cabbage is the second product featured in this ranking of the price difference, establishing the origin / destination percentage difference at 543%, which represents an increase of 34% compared to July. It is a curious fluctuation, in June the difference reached 805% placing cabbage in the first place of the table, in July it fell to 509%, and now it increases again. In origin, the kg of cabbage was quoted at € 0.30, 2 cents less than in July, a decline that has moved to the market, since consumers pay an average of € 1.93 per kilogram (2 cents less than in July). Cabbage is another food that remains several months in the top positions of the IPOD and rarely see that it is below 500%, the data indicate that last month we paid 6’43 times the value of cabbage in the field . 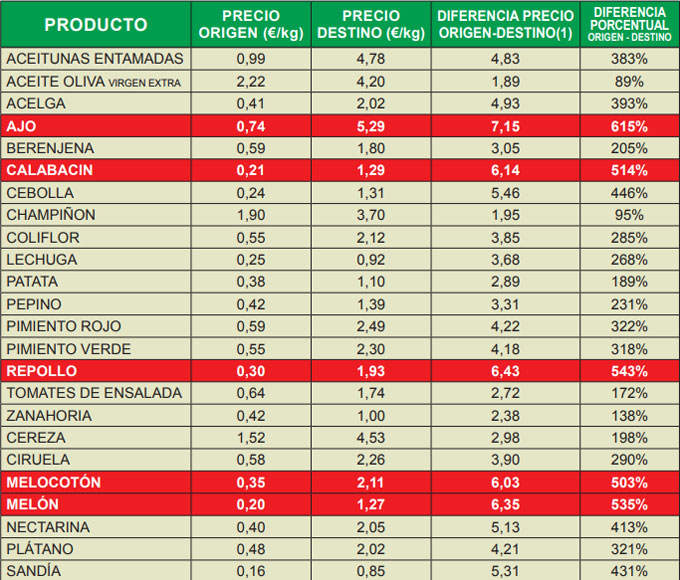 The third product that exceeds the imaginary barrier of 500% difference is the melon, one of the quintessential summer fruits, the origin / destination percentage difference was set at 535%, 60% less than in July. In the field, the kg of melon was quoted at 0’20 euros, the same price as in the month of July, and in the market the average price was 1’27 euros per kilogram, which means a decrease of 12 cents compared to the previous month. Despite the reduction in the market price, consumers have paid 6’35 times the value of melon at source.

Zucchini is the fourth food highlighted in the Price Index in Origin and Destination of Foods of August 2019, with a percentage difference origin / destination of 514%, which represents a reduction of 133% compared to the difference recorded in July . In the field, the kg of zucchini was quoted at 0.21 euros, which represents an increase of 4 cents compared to the month of July, and in the market, the kg of zucchini was quoted at an average of 1.29 euros, 2 cents more than they cost in July. The data shows that in the path from the field to the table, the zucchini increased its value 6’14 times.

Finally, peaches are the last product featured in this ranking of speculative price differences, with a 503% origin / destination percentage difference. In the field the kg of this fruit was quoted at 0.35 euros, 5 cents less than in July, and in the market, the average price was set at 2.11 euros per kilo, which has meant a decrease of 32 cents on the price of the month of July. The data indicates that consumers have paid 6’03 times the value of peaches in the field. Compared with August of other years, the data is good, it seems that price containment has prevailed and there have been no such exaggerated differences as on other occasions, remember that the price of melon has exceeded 1,000% difference. It has not happened as in other years, where the most popular summer fruits and vegetables were placed in the top positions and, in addition, with truly speculative price differences.